Did Raiders again ‘reach’ in the draft? Depends upon your definition – Las Vegas Raiders Blog

HENDERSON, Nev. — Still trying to figure out how the Las Vegas Raiders could reeeaaach, yet again, for their first-round draft pick — this time Alabama offensive tackle Alex Leatherwood?

After taking Clelin Ferrell at No. 4 overall in 2019. After making Henry Ruggs III the first receiver selected in an historically-deep draft for wideouts in 2020.

As in, stop trying to figure it out. Because it all depends upon your definition of “reach,” and who, exactly, is defining it.

Look, the Raiders, like 31 other NFL teams, have their own draft boards and rankings and really don’t care about your mocks or what Mel Kiper Jr., Daniel Jeremiah or anyone else thinks heading into the draft. 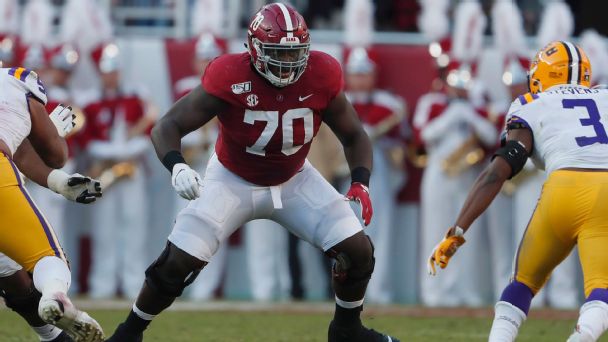 “I ignore it 100 percent, except for the fact that I think it’s part of my job to understand league value,” said Raiders general manager Mike Mayock, who, before being hired by the Raiders in 2019, used to make a living placing values on college players and producing his own mock drafts for NFL Network.

“So if you’re going to move up or down the board, you have to know what league value on players are.”

This is not to defend, or decry, the Raiders’ thinking as much as it is to explain how they could select Leatherwood, nowhere near a consensus Top 5 offensive tackle, at No. 17 overall.

To paraphrase Sally Field, the Raiders loved him. They really, really loved him. And at the end of the day, that’s all that mattered. Or did you miss Mayock, who used to make a living alongside the likes of Kiper and Jeremiah, saying that, ratings be damned, Leatherwood was their guy at No. 17?

“In all honesty,” Mayock said, “he was the highest-rated player on our board at that time — offense or defense.”

And there it is. As in, per the Raiders’ draft board, the notions of specific need and best player available intersected when Las Vegas came on the clock. And from Las Vegas’ perspective, the pick was a no-brainer.

Meanwhile, much of Raider Nation was ready to leap from the Stratosphere Tower after the Leatherwood pick, what with both Christian Darrisaw and Teven Jenkins still available. Surely, the Raiders could have traded back and still got their man, no?

Eh, no. Not according to Mayock.

“Just when we got on the clock a team did call us and inquired about moving up but they gave us a very poor trade offer and it was a team that needed a tackle,” he said. “So the combination of the poor offer and their need kind of pushed us away from that.

“There’s a risk/reward scenario and, in this case, we didn’t feel that it was worth it.”

Looking back, the only team after Las Vegas to select an offensive tackle in the first round was Minnesota, who took Darrisaw at No. 23 (Jenkins went 39th to Chicago).

The Raiders trading up in the second round to get the consensus top-ranked safety in Trevon Moehrig at No. 43 seemed to quell Raider Nation. Because, really, had you flipped those two picks — Moehrig in the first round and Leatherwood in the second — many would have celebrated on the Strip.

In reality, the Raiders addressed two real and specific needs at right tackle and free safety and both Leatherwood and Moehrig should start this fall.

Same as in 2019, when the Raiders needed a defensive end and they took the highest-guy on their board at the time in Ferrell, and last season with Ruggs.

“He was the only person I wanted in this draft,” Raiders owner Mark Davis told ESPN.com of Ruggs during training camp.

Hate the player, not the game … or somesuch.

“I mean, it definitely put a chip on my shoulder,” Leatherwood said of his pre-draft rankings, despite being the reigning Outland Trophy winner and a captain for the national champs. “It bothered me a little bit, but at the same time I’m not a media guy. I’m not the type of dude to get caught up in all that garbage, because I know what my film said about me. And the GM and the coach, they know that as well. I’m just grateful that they watched that film and they saw me as good enough to be the 17th overall pick.

“I’m more than excited to get to the program and prove them right. Not necessarily prove the haters, the people who made all the mock drafts and all this stuff wrong, but to prove to myself and the Raiders organization right.”

And so it went for the Raiders the remainder of their draft — taking an edge rusher who was deemed a late-round prospect at No. 79 in Malcolm Koonce, selecting a receiver-turned safety who will be converted into a weakside linebacker in Divine Deablo one pick later, trading up to draft another safety in Tyree Gillespie at No. 143 before addressing the secondary again it with cornerback Nate Hobbs at No. 167 and then bookending their draft with another offensive lineman in center Jimmy Morrissey.

Yeah, offensive line coach Tom Cable has some juice within the walls of Silver and Blackdom.

Really, the biggest surprise was that five of Las Vegas’ seven picks were on the defensive side of the ball, as it was the first time in franchise history the Raiders did not draft an offensive skill position player.

Or have you forgotten Jon Gruden coaches the Raiders and has final say on personnel decisions?

“I love Jon,” Mayock said at the conclusion of the draft. “He was so good. I mean, we went into Day 2 and we attacked the defensive side of the ball and he was more excited than I was …

“And at the end of the day, you’re right, Jon Gruden is an offensive guy, but what did we do all weekend, we tried to help our defense get better and I give him a ton of credit for that. He was all in.”

Still trying to figure it out?