OWINGS MILLS, Md. — The Baltimore Ravens installed a play during training camp for a swing pass to a running back, and Joe Callahan felt like it was a flashback.

The receivers on the right side of the formation all ran crossing routes over the middle, which left the back wide open for a touchdown. Callahan, the Ravens’ third-string quarterback at the time, who played under offensive coordinator Greg Roman in high school, couldn’t wait to talk about what he saw after practice.

“Do you remember when we did this for Holy Spirit?” Callahan asked Roman.

“Yeah, we got two touchdowns against Immaculata,” Roman replied.

Roman would call that same play for one of the most prolific offenses ever in the NFL. And, just like that New Jersey high school playoff game, Baltimore running back Mark Ingram was left uncovered and scored on a 25-yard catch in this season’s 41-7 win over the Houston Texans.

The roots of the NFL’s highest-scoring offense, as well as part of Roman’s unorthodox approach, can be traced back to a small Catholic school outside Atlantic City, New Jersey. The architect of an offense that has quarterback Lamar Jackson performing at an MVP level first called plays against the likes of Lower Cape May and Mainland Regional.

Following the 2007 season, Roman was part of Brian Billick’s staff that was let go after the Ravens’ 5-11 campaign. Roman, an offensive line assistant at that point, had spent all 13 years of his coaching at the NFL level but didn’t like any of the opportunities open at the time. He wanted to be a playcaller, and Ravens owner Steve Bisciotti suggested to him that he look at coaching outside the NFL.

Roman ultimately chose to become the offensive coordinator at his high school alma mater, where a longtime friend had taken over the program. He went from coaching a future Hall of Fame lineman in Jonathan Ogden to picking up teenage players to make sure they got to practice.

Part of Roman’s innovation in the NFL came out of improvisation in high school. There was one game where one tight end was in detention and another was absent from school. Roman used offensive linemen to replace his missing tight ends, which might explain Roman’s current fascination with using as many big-bodied blockers as possible.

“It was definitely a risky and outside-the-box move,” Roman said of coaching high school. “But I had never called plays before. I felt like I had a good enough reputation that I’d get hired somewhere.”

Not many NFL coaches would take a high school job. But not many coaches have called triple-option plays in the NFL, either.

Taking risks and thinking outside the box have been staples of Roman’s offenses. After his one year at Holy Spirit, Roman produced as many creative wrinkles as points in his offenses at Stanford, the San Francisco 49ers and the Buffalo Bills, the team the Ravens face Sunday (1 p.m. ET, CBS).

Monday through Friday, host Mina Kimes brings you an inside look at the most interesting stories at ESPN, as told by the top reporters and insiders on the planet. Listen

Roman has also built a reputation as the mobile-quarterback whisperer, designing attacks that put Colin Kaepernick in the Super Bowl and Tyrod Taylor in the Pro Bowl. He has worked that same magic with Jackson, constructing an offense that accentuates his unique talents instead of forcing him into a prototypical NFL system.

In Roman’s first season as Ravens offensive coordinator, Baltimore is averaging an NFL-best 33.8 points and is on pace to score the eighth-most points in NFL history (541).

“Greg Roman has inserted himself into the conversation of one of the great playcallers in the NFL,” said Dan Orlovsky, a former NFL quarterback who is now an ESPN analyst. “I love Sean McVay, I love Kyle Shanahan, I love Gary Kubiak and I love Matt LaFleur. A lot those guys are calling things that are somewhat similar. But the Ravens are doing something that is incredibly unique.”

At age 22, Roman found himself on the same coaching staff with Don Breaux, who’d been the right-hand men of former Washington Redskins coach Joe Gibbs; Chick Harris, who had a similar relationship with former Bills, Los Angeles Rams and Seattle Seahawks coach Chuck Knox; and Richard Williamson, who worked alongside Alabama’s Bear Bryant.

It was during those seven years with the expansion Carolina Panthers that Roman learned from coaches who began their careers in the 1960s and picked up their vernacular.

Roman is teaching an offense that’s never been seen in the NFL, and he’s doing so by using one-liners from generations ago while breaking down film.

You’re as soft as medicated cotton

Don’t be the turd in the punch bowl

He doesn’t know whether to s— or wind his watch

“You can tell they’re super old-school,” offensive lineman James Hurst said. “Even Marshal [Yanda] is like, ‘I’ve never heard that in my life.’”

There’s hardly a reaction anymore in the meetings. Roman delivers these sayings as nonchalantly as if it’s a normal sentence.

Callahan met up with some former high school teammates, and he was asked if Roman still used the same one-liners in the NFL.

Roman said none of the sayings are planned.

Ask anyone in the Ravens’ locker room to describe Roman and the common response: “He’s a football guy.”

Roman grew up going to Philadelphia Eagles games at Veterans Stadium. He even worked as a ball boy for the Cincinnati Bengals for a summer.

Tom Jackson praises the Ravens’ ability to pull out a win despite Lamar Jackson’s struggles through the air in bad elements. For more NFL Primetime, sign up here for ESPN+ https://plus.espn.com/

Roman once said Brown served as his inspiration to get into coaching (and perhaps his knack for innovation).

“He’s all about ball and family,” Ravens offensive tackle Orlando Brown Jr. said. “I feel like if I’ve seen him in the grocery store, the first thing he’d talk to me about is running power and gap schemes and my footwork.”

Roman is known for his expertise in formulating next-level run-game strategy. He understands how to gain numbers advantages and how to leverage defenses. The Ravens have totaled 2,494 rushing yards this season, the most by a team through its first 12 games since O.J. Simpson and the 1975 Bills. 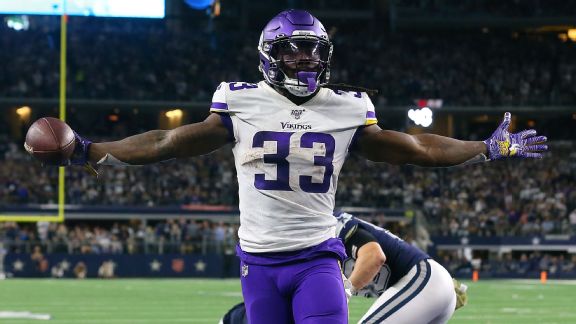 • How Dalvin Cook has ‘juiced’ the Vikings
• Plane perks help Seahawks on the road
• How hunting connection is sparking Steelers
• Why Ron Rivera should be worried
• Making the case for Giants’ Pat Shurmur
• Even when Lamar struggles, Ravens win

What hasn’t been as recognized is the way Roman builds up his players. Amid the zingers, he routinely offers words of encouragement, and no one on the Ravens has ever heard him yell.

“For me, I almost see him as a dad figure,” fullback Patrick Ricard said. “He doesn’t get mad at you. He’s a disappointed dad. He’s going to get on you. He wants the most out of you. And when you mess up, he’s just like, ‘Come on, man.’”

The unpredictability and versatility factors are perhaps Roman’s biggest strengths.

The Ravens can spread defenses out and line up Jackson in an empty backfield. They can also go “medieval” with five offensive linemen, three tight ends and a fullback.

The difficulty isn’t just trying to tackle Jackson and Ingram. It’s trying to find the ball.

Baltimore runs the sprint option, the run-pass option, the triple option with pitch. There’s misdirection with jet sweeps and the “Heisman package.” That’s not even including the fact no team uses more pre-snap motion than the Ravens.

With all that, defenses have had problems trying to figure out the Ravens’ offense. The Ravens scored 37 points on the New England Patriots despite Bill Belichick having a bye week to prepare for them. Baltimore put up 45 points on the Rams and limited two-time NFL Defensive Player of the Year Aaron Donald to one tackle.

“What he’s (Roman) done such a great job of, is he’s adjusted the scheme to fit the personnel and to maximize guys’ opportunities to make plays and do what they do best,” Rams coach McVay said. “That’s a sign of a great coach.”

Another sign of a great coach is Baltimore’s preparation and efficiency. The Ravens lead the NFL in scoring a touchdown on 37% of their drives and reaching the end zone on 58% of their opening drives.

“He’s been about business,” Jackson said. “We want to come smack the defenses in the mouth; that’s what he’s been telling us. Not just certain teams, but he’s been saying that all year. That’s what he wanted to do. He wanted to be aggressive this year. He’s been showing it, and I love it right now …”

One of the bigger offseason questions is whether the Ravens will be able to keep it going. If teams continue to seek out innovative, offensive playcallers, Roman should be a hot name in head coaching searches.

“Honestly, I’ve been through this thing before,” said Roman, who was a head coaching candidate after helping take the 49ers to the Super Bowl in 2012. “The best thing to do is keep blinders and do your job the best you can. Somebody once said to me, ‘Do a great job with the job you got and don’t worry about anything else, no matter what. Do the best job you can do every day and love the job you got’ — which I do.”

January 13, 2020 SporterX
[ad_1] KANSAS CITY, Mo. -- Andy Reid stood there like he always stands there, looking out at the field like
Football

October 14, 2019 SporterX
[ad_1] An attempt to "Rick-roll" fans of the visiting Pittsburgh Steelers at the start of the fourth quarter Sunday instead

Kobe — ‘Nothin but love’ for Shaq after drama

Rain pushes opening round of Mayakoba Classic to Friday

Can anyone catch Shane Lowry at The Open?