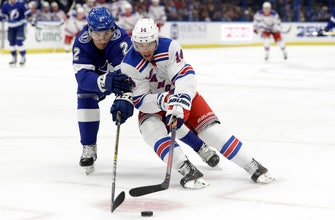 Kucherov had a goal and a pair of assists as Tampa Bay scored four times in the opening seven minutes. Stamkos got his second goal in 10 games on the power play during a four-goal second that made it 8-1.

Alex Killorn scored two power-play goals and picked up an assist, and Andrei Vasilevskiy stopped 20 shots to tie Ben Bishop for the most wins by a Tampa Bay goalie with 131.

The Lightning, who hadn’t played since Saturday when they completed back-to back wins over Buffalo in Stockholm, Sweden, also got goals from Luke Schenn, Ondrej Palat, Pat Maroon, Kevin Shattenkirk, and Yanni Gourde. Victor Hedman had three assists and Gourde recorded two assists.

Hamilton capped a back-and-forth game that featured three goals in the final 6:25 of regulation. After Buffalo’s Johan Larsson tied it with 41 seconds left in the third period, Hamilton scored 2:32 into the extra session on a slap shot from the right circle after Ryan Dzingel drove to the net and left the puck for Hamilton.

Andrei Svechnikov and Teuvo Teravainen each had a goal and two assists for the Hurricanes, who have won two straight following a four-game losing streak. Jordan Staal and Sebastian Aho also scored for Carolina. Petr Mrazek made 29 saves.

Jeff Skinner had a goal and an assist for Buffalo, which has lost six in a row following a 9-2-1 start. Henri Jokiharju and Curtis Lazar also scored, and Carter Hutton made 24 saves.

Zach Parise had a goal and an assist and Kevin Fiala scored for the fourth time in six games for Minnesota, which had just finished a four-game West Coast Swing. The Wild were tied for an NHL-low 13 points entering the day amid a road-heavy early schedule. They are 4-1-1 at home.

Devan Dubnyk made 27 saves for Minnesota.

Conor Garland and Lawson Crouse scored for Arizona, which came back twice to the tie the game. Antti Raanta stopped 31 shots.