TIJUANA, Mexico — San Diego wasn’t the only city upset by the Chargers’ departure for Los Angeles three years ago.

The Chargers built a significant following in the Mexican border town of Tijuana during the team’s 56 years spent just north in San Diego. Although disappointed and frustrated by the move, many of the fans, including Tijuana resident Pedro Panama, remain supporters of the team.

They watch and root for the Los Angeles Chargers at home, in sports bars or at the casino on game days, they follow the team through social media, and a few die-hards still make the more than two-hour trek to Carson on game days. That commute could include an hours-long wait to cross the border from Tijuana into the United States.

“I still like the team,” said Panama, a Chargers fan for 30 years who wore a navy-blue Philip Rivers jersey while watching the NFL at Buffalo Wild Wings on Sunday. “I still like Rivers. I was a season-ticket holder when they played here in San Diego, and I wish they’d come back to San Diego. I don’t agree with them moving to L.A.”

With the Chargers playing in Mexico City against the Kansas City Chiefs on Monday Night Football (8:15 p.m. ET, ESPN), Panama said he would like to make the trip to see his favorite team play in his home country.

It’s meaningful for Panama and other Chargers fans in Tijuana to see the Bolts playing in Mexico.

Like Panama, Raul Cortez wore a Rivers jersey while playing slots at Caliente Casino and sports betting book in Tijuana. The casino is situated next to Estadio Caliente, home of the Club Tijuana soccer team that plays in Liga MX, Mexico’s top league. 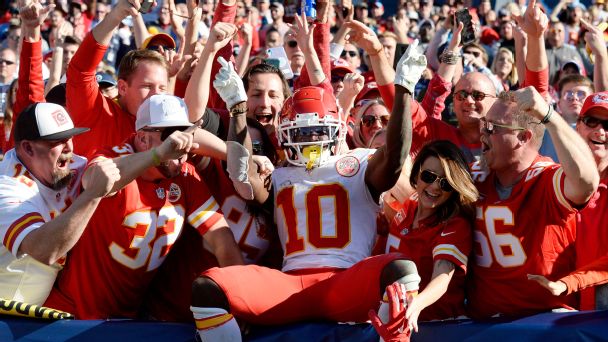 Cortez is right. According to numbers provided by the league, the Chargers have the largest NFL following of any team in the Mexican state of Baja California and the largest Hispanic fan base of any NFL team (41.1%).

The Chargers credential six media organizations in Baja California that travel to cover the team on game days. The Bolts are the eighth-most popular team in Mexico City.

Dante Lazcano has covered the Chargers since 1995 and worked on the team’s Spanish language game-day broadcasts since 2009. Although the organization could have done more to cultivate the fan base in Tijuana, Lazcano said the Chargers remain an important team to his city.

“The people of Tijuana, Baja California, Mexicali, Ensenada, Rosarito and Tecate, we grew up with the San Diego Chargers, and some of those guys are still loyal because we grew up with those colors and identify with that team,” Lazcano said. “And I’m talking as ‘we’ because I’m part of this community, and we like football.

“Unfortunately, they left town, but some people still support them. Right now, it’s difficult for those guys to follow them to L.A. because it’s a two-hour trip, and it’s expensive.”

The game against the Chiefs in Mexico City provides another opportunity for the Chargers to reach fans in Tijuana. Even more, Cortez believes the game in Mexico City could help build momentum for an NFL franchise to relocate to the city, something he would be in favor of.

“Oh, yeah, for sure,” Cortez said. “We like soccer, but we like football, too. We would definitely support it.”

For Chargers cornerback Michael Davis, the trip to Mexico City is a chance for family members to see him play for the first time. Davis’ father is black, but his mother, Ana Martinez, is from Mexico and taught him Spanish at a young age.

Growing up, Davis regularly traveled to Mexico during holidays to visit family on his mother’s side, and he is looking forward to the opportunity for family to see him play in person.

Davis said his family is from Michoacán, about four hours west of Mexico City. However, his grandparents currently live in Mexico City, so his family will be able to see him play for the first time at Estadio Azteca. His mom is making the trip as well.