How the Rams’ Jalen Ramsey ‘gets in people’s heads’

“He was calling all my routes poo, like poo poo,” Woods said, chuckling, as he thought back to a game two seasons ago against Ramsey and the Jacksonville Jaguars. “He was talking crazy trash.”

Ramsey has since moved on from Jacksonville to Los Angeles in a blockbuster trade last month. The Rams gave up two first-round picks and a fourth-round pick for the All-Pro cornerback.

Ramsey joined the Rams with a reputation for delivering unfiltered takes, widely illustrated in a GQ article that ran before last season in which he critiqued quarterbacks from across the league. Ramsey famously called Buffalo Bills quarterback Josh Allen “trash,” while Rams quarterback Jared Goff graded as “average to above average.”

“In relation to what he was calling a lot of people,” Goff said, “that wasn’t half bad.”

But those takes from Ramsey were delivered off the field.

Rams players have laughed, while appearing equally impressed, by Ramsey’s dedication to his craft — football — and his endless banter before and after the whistle since joining the team a month ago. It’s a level of trash talk, several players said, they haven’t seen before.

“That get my energy, that get my blood flowing,” cornerback Nickell Robey-Coleman said of Ramsey’s trash talk.

These days when Woods hears Ramsey jawing nearly every play, he smiles, perhaps relieved he’s no longer the victim.

“If you take it personal,” Woods said, “he’ll go all game.

“It’s just a lot of thoughts that just go through your head through a long game. Some overthrows, you’re like, ‘Man, am I slow?'”

In his Rams debut, Ramsey covered Atlanta Falcons receiver Julio Jones, then filled his ear with nonsense long after the blown whistle, whether the ball came to Jones or not.

Jones caught six passes for 93 yards, including a 39-yard catch over Ramsey, though some of Jones’ receptions were made when Ramsey was not in the game.

When asked about his running commentary with Jones, Ramsey thought little of it. “I talk s— every game,” he said.

“It was a good show for the fans, for myself, whenever I got a chance to look back,” linebacker Cory Littleton said, laughing. “He is a great addition to this team.”

“He talks a lot more than other corners,” Tate said. “He plays with that fire.”

JuJu explained what it’s like to play against Jalen Ramsey 😆 pic.twitter.com/ljGDwKh4QJ

Most recently, Ramsey took aim at Pittsburgh Steelers receiver JuJu Smith-Schuster, a player Ramsey meant “no disrespect to” but said was no Antonio Brown before Sunday’s game.

“He’s right, though,” Smith-Schuster said after he caught three passes for 44 yards, and baited Ramsey into committing two penalties, in a 17-12 victory over the Rams.

While Smith-Schuster negotiated his way out of that pregame diss, he couldn’t quite navigate the words Ramsey, 25, barked on the field.

“He talks a lot,” Smith-Schuster said. “He talks so much. He said so many cuss words I ain’t never heard of, and I’m 22 years old.”

“It’s fun,” Rams coach Sean McVay said. “I’m not exactly sure what’s going on, what’s being said. I just know it looks like he’s having fun out there competing.”

When asked about his trash talking, Ramsey downplayed his antics.

“I mean it’s nothing really,” Ramsey said. “It’s just part of my personality out on the field, that’s all.”

But Woods offered some insight into Ramsey’s words: “Jalen is definitely one who goes at you all game about your socks, your cleats. Whatever it is, he’s got a problem with it.”

As for how Ramsey comes up with this stuff?

“I wouldn’t look too much into it,” Ramsey said. “Honestly, it’s more about my play on the field than it is about my trash talk.”

The fifth overall pick in 2016, Ramsey has deflected 45 passes and has nine interceptions, including one returned for a touchdown, in 54 games.

In the fourth season of his five-year rookie deal, Ramsey is widely considered among the best cornerbacks in the NFL.

Since his arrival in L.A., the Rams’ defense has experienced a noticeable uptick.

The show will stream live at 7:30 p.m. ET each Sunday during the 2019 season and will be available on demand each week until late Wednesday night. Watch on ESPN+

Through a 3-3 start, with cornerbacks Aqib Talib and Marcus Peters — who have both since been traded — the Rams allowed an average of 25.67 points per game (24th in the NFL) and 346.8 yards (12th). With Ramsey, the defense has shifted to play more man coverage in the secondary, which has allowed for the defensive front to put more pressure on the quarterbacks. The adjustments have made the Rams a top defense over the past three games, allowing an average of 12 points (1st) and holding opponents to a total QBR of 38.6 (6th), while allowing 299 yards per game (7th).

It’s without doubt that Ramsey’s physical contributions have impacted the Rams the most, but his persona certainly hasn’t hurt.

Robey-Coleman said of Ramsey’s trash talk: “Seeing him talk s— to Julio and in his face, that made me want to get up in [Mohamed] Sanu face, you know what I’m saying? And say a couple words to him … it rub off like paint, it’s really a energy thing. It’s a mentality, It’s a mindset.”

“He’s got a lot of attitude and it’s fun,” Goff said. “He does bring a little bit of spark to us, our whole team, not only our defense just our whole team.”

Receiver Cooper Kupp confirmed that Ramsey’s methods aren’t without results. “You know it gets in people’s heads,” Kupp said. 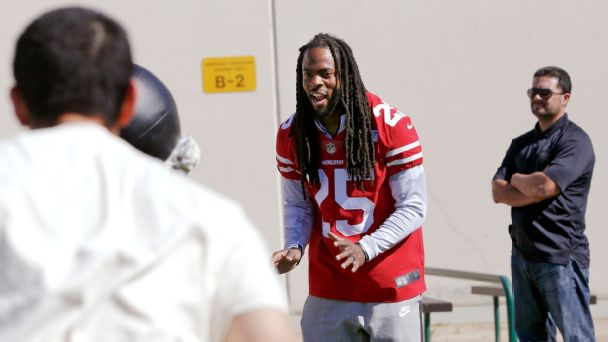 Outside linebacker Dante Fowler Jr., Ramsey’s teammate in Jacksonville for 2 ½ seasons before he was traded to the Rams at the deadline in 2018, watched first-hand when a then-rookie Ramsey went at Baltimore Ravens receiver Steve Smith, a 16-year pro at the time, who also reveled in talking trash.

“We be laughing most of the time, like we’ll listen to what people say and stuff and we’ll be laughing,” Fowler said.

And is there such thing as too much?

“If it gets out of hand, we’ll tell each other to chill out, come on, let’s go,” Fowler said. “But then we sit back and laugh about it on the bus on the way to the airport on the way back. It’s funny.”

ESPN’s Ben Baby and Brooke Pryor contributed to this report.