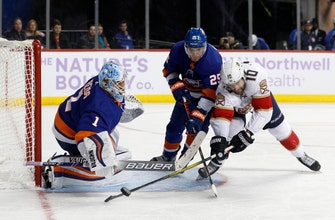 Mathew Barzal had a goal and an assist to help New York bounce back from a 4-3 home overtime loss to Pittsburgh on Thursday night. The Islanders earned a point for the 12th straight game, a stretch that followed a 1-3-0 start and began with a 3-2 shootout win against the Panthers at Nassau Coliseum on Oct. 12.

Aleksander Barkov scored for Florida, and Sergei Bobrovsky finished with 34 saves. The Panthers lost in regulation for just the second time in 13 games.

Jack Eichel and Sam Reinhart scored for Buffalo. The Sabres have lost five in a row.