Last week was a stark reminder that some fantasy breakthroughs take longer than others.

That’s too bad for all the fantasy owners who have probably drafted and dropped these guys in the past. But are they actually worth investing in now?

As always, ESPN’s NFL Nation reporters are here to help.

Jones: Buccaneers coach Bruce Arians announced Jones will keep the starting gig after he made the most of his first career start last week (18 carries for 67 yards and a touchdown, two catches for 15 yards).

“I think RoJo has earned the right to play a little bit more and start the ballgame. … He’s been consistent [and] he’s been more explosive,” Arians said — though he added that T.J. Logan and Dare Ogunbowale will continue to serve as third-down backs.

Bucs reporter Jenna Laine said veteran Peyton Barber also will stay involved. But she doesn’t expect Jones to relinquish the primary role after he has “continued to pass the test each week as he’s given more and more responsibility.” She pointed to some critical fourth-quarter plays he made in Tampa Bay’s Week 4 win over the Rams and last week’s overtime loss at Seattle.

Laine also pointed to offensive coordinator Byron Leftwich’s comments about Jones “coming into his own.”

“He started growing and understanding what it’s like to be a professional,” Leftwich said.

Parker: “Predicting a DeVante Parker breakout season has become an annual tradition,” said Miami Dolphins reporter Cameron Wolfe. But Wolfe said there are several reasons why Parker should finally be a viable flex option for deeper leagues after posting 22 catches for 269 yards and four TDs over the past five games.

Parker is finally staying healthy. He is Miami’s clear No. 1 receiver after Preston Williams suffered a season-ending knee injury last week. And perhaps most promising, Wolfe said the Dolphins’ offense has “completely turned the corner” since Ryan Fitzpatrick took over at quarterback during Week 6. They went from scoring two touchdowns in the first 19 quarters of the season to 10 TDs over the past 13 quarters.

Gesicki: For many of those same reasons, Wolfe said it’s possible to consider using Miami’s Gesicki in this “uber-shallow tight end fantasy season.” Wolfe said you shouldn’t expect Gesicki to consistently produce six catches for 95 yards like he did last week. But the 2018 second-round draft pick does have at least 40 receiving yards in three of the past four weeks. And with 248 yards on the season, he already has surpassed his total from his disappointing rookie year.

“With Williams gone for the year, he could work his way up from a No. 4 or No. 5 receiving option for Fitzpatrick to a No. 2 or No. 3,” Wolfe said. “I wouldn’t feel comfortable with him as my permanent TE1, but I think he’s worth rostering as a streaming option with upside.”

Drake: Drake went from being traded to the Arizona Cardinals on a Monday to busting loose for 110 rushing yards, 52 receiving yards and a TD just three days later.

Matthew Berry shares his thoughts on what to do with the unpredictable Cardinals backfield with David Johnson and Kenyan Drake.

Unfortunately it will be hard to count on that kind of volume going forward, now that Arizona’s starting running back David Johnson said he will “definitely” return to the lineup and is “100 percent” recovered from his ankle injury. But Cardinals reporter Josh Weinfuss thinks Drake will still have fantasy value because coach Kliff Kingsbury isn’t afraid to go with the hot hand.

Kingsbury said he will find ways to utilize both. And Johnson could always spend more time running passing routes to get them on the field together.

“When it comes down to it, if he’s productive, he’ll get the ball,” Weinfuss said of Drake. “Johnson’s return will definitely chip into Drake’s touches. But if last Thursday night was any indication, Drake can make the most of his opportunities.” 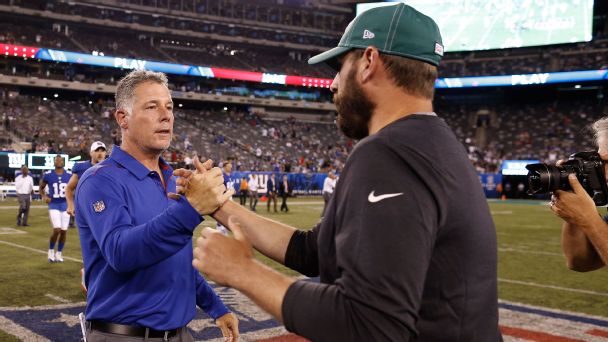 Garoppolo: The San Francisco 49ers QB had by far the biggest fantasy output of his career last week, with 317 yards and four touchdowns against Arizona. Although that probably won’t become the norm in San Francisco’s run-first offense, 49ers reporter Nick Wagoner pointed out that most of their remaining games are against defenses that have been much better against the run than the pass (the Seahawks twice, the Cardinals again, the Ravens, Saints and Rams).

“It’s likely that teams will continue to try to force Garoppolo and the passing game to beat them. Can he do it? Don’t rule it out,” Wagoner said. “Out of their next five opponents, only the Packers rank better than 22nd in the NFL in opponents’ QBR.”

Although go-to TE George Kittle is questionable this week, Wagoner wrote about how Garoppolo has gotten a boost from newly acquired Emmanuel Sanders — “the best receiver he’s played with in San Francisco.” The 49ers will also be getting starting tackles Joe Staley and Mike McGlinchey and fullback Kyle Juszczyk back from injuries as soon as this week.

Now for the rest of our weekly tour around the NFL:

Buffalo Bills: Rookie RB Devin Singletary finally got the kind of workload we’ve been waiting for — and he continued to produce, wrote Marcel Louis-Jacques. Singletary’s 20 carries doubled his season total.

The show will stream live at 7:30 p.m. ET each Sunday during the 2019 season and will be available on demand each week until late Wednesday night. Watch on ESPN+

Carolina Panthers: A detailed breakdown from David Newton on why Cam Newton might have played his last game as the Panthers’ QB — which would mark the end of an incredible fantasy era. Only Drew Brees scored more fantasy points from 2011-18.

Dallas Cowboys: From Todd Archer: As effective as Dak Prescott and the passing game have been, Ezekiel Elliott remains the focal point of the Cowboys’ plan.

Denver Broncos: The Broncos have insisted that rookie TE Noah Fant would eventually make more impact in the passing game, wrote Jeff Legwold. He had a breakthrough with three catches for 115 yards and a TD last week, and he hopes to keep “stacking bricks.”

Matthew Berry loves Aaron Rodgers, Kyler Murray and Jameis Winston while he does not love Matthew Stafford facing the Bears.

Green Bay Packers: Aaron Rodgers said the Packers would love to get WR Davante Adams going now that he is back from a toe injury. “But we can’t get away from what’s got us to this point,” Rodgers said after last week’s flop against the Chargers. As Rob Demovsky wrote, Rodgers would like to see 15-20 touches for RB Aaron Jones and 10-15 for RB Jamaal Williams.

Los Angeles Rams: A year removed from ACL surgery, Cooper Kupp has emerged as one of the NFL’s top receivers, wrote Lindsey Thiry — especially when it comes to yards after the catch.

New Orleans Saints: Alvin Kamara said he feels good and plans to play Sunday like he “hasn’t missed a beat” after returning from knee and ankle injuries. But he doesn’t mind sharing more with Latavius Murray, who thrived in his absence.

Maybe both of them can help take some of the burden in the passing game off of WR Michael Thomas, who has 40 more catches and 579 more receiving yards than anyone else on the roster.

Mike Clay is concerned about D.K. Metcalf matching up against a tough 49ers defense.

Seattle Seahawks: General manager John Schneider told 710 ESPN Seattle that the Seahawks don’t view new WR Josh Gordon as a “white knight to save the day.” Brady Henderson wrote that Gordon’s arrival shouldn’t change the role of “ridiculous” WR Tyler Lockett, who is benefiting from “growing up together” with Russell Wilson in the Seahawks’ offense.

Henderson also wrote about how impressed Seattle has been with the development of rookie WR DK Metcalf, who plays “grown man” football despite wearing a mouthpiece designed to look like a pacifier.