PHILADELPHIA — Julie Ertz said she was scared to do the math.

Sitting next to her husband, Zach Ertz, on Thursday at the Philadelphia International Airport, about to head off on the next leg of their whirlwind tour, she was asked how often the couple is together during the course of a calendar year.

“Not as much as obviously I want to,” she finally said, “but probably way less than half the year that I get to see him in person.

“I jokingly say I have a relationship on my phone because we probably FaceTime more than I actually see him.”

It made the past month all the sweeter.

Rare are the times that Zach and Julie Ertz’s schedules align, but that’s exactly how it played out for the 2019 Women’s World Cup in France.

The Philadelphia Eagles wrapped up minicamp on June 13. Zach, their star tight end, took a red-eye to Paris the next day and got there in time to see Julie score her first World Cup goal in a win against Chile.

After slapping hands with her teammates, Julie found Zach in the stands and blew kisses up to him. Not anything planned, she said, but something that just felt right.

“I was so pumped,” Zach said. “I thought she was going to get one. I was joking with her, ‘I flew all this way, I better see a goal.’ And needless to say, she didn’t let me down, as always.” 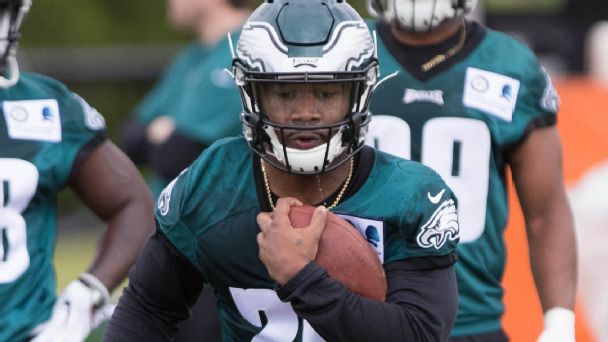 • Eagles RB Sanders short on time to impress
• Can Kingsbury thrive where others have not?
• QB Watson, O-line share blame for sacks
• How Ravens landed best kicker in the game
• Broncos FB values the simple things

Zach, 28, and Julie, 27, have taken their respective sports by storm. Zach is coming off a monster season for the Eagles in which he set an NFL record for most catches by a tight end with 116. The season prior, he caught the deciding touchdown in Super Bowl LII against the New England Patriots, helping deliver the first Lombardi trophy to Philadelphia. Still, he is playing catch-up to Julie, the standout midfielder and 2017 U.S. Soccer Female Player of the Year who now has a pair of World Cup trophies on the mantle.

Climbing to the top of your profession takes sacrifice. In the Ertzes’ case, part of the sacrifice is time spent with each other.

They live in different cities for most of the year: Zach in Philadelphia and Julie in Chicago to play for the Red Stars of the National Women’s Soccer League. Julie had been away since April. Zach squeezed in trips to Chicago in between organized team activities this spring in order to see his bride of two years.

“When her season is in, she’s the one that kind of takes the priority and I travel to her a little bit more; and when I’m in season, it’s kind of the opposite,” Zach said. “Sometimes, I have to sacrifice kind of how my body feels and go jump on a plane and go see Julie on a weekend because that’s what it takes for our marriage to be successful and for her to be OK and me be OK. The marriage is the most important thing that we have, not the sports, so whatever it takes for us to be happy and successful as a married couple takes precedent.”

On having Zach in attendance at the World Cup, Julie said: “It was huge for me. Obviously, there’s such a mental side to a tournament, it’s a long tournament, we were there for like 45 days, so just being able to get my mind off soccer for a little bit, just that perspective and his support I feel like allowed me to refresh myself in between the games. It was a tournament that was very special in my heart for that reason.”

Zach sported a patriotic jersey that read “Mr. Ertz” on the back during the games, enjoying the switch from a starring role to a supporting one.

“There’s never been a [thought] in my mind where I’m like, ‘Man, I should be the one that people are asking for pictures; I’m a pretty good player too.’ When people go up to Julie and go, ‘Hey, can I get a picture with you?’ it’s the opposite, it’s like, ‘Hey, OK, do you need me to take the picture for you?’ I have no issue doing that,” Zach said. “I’m just excited to be her husband, and I think she’s excited to be my wife, and we care about each other so much more than just athletes; we care about each other fully as people. And if she loves playing soccer and I truly love her, I’m going to be happy when she experiences success and just encourage her along the way.”

They met at a baseball game when Zach was a junior at Stanford and Julie a sophomore at Santa Clara. When they first started talking, Zach said, they didn’t even know that the other was involved in sports, and they built a foundation that wasn’t dependent on their athletic pursuits. But athletics have been a central, undeniable part of their story. Both say they have benefited from having a partner who understands the commitment that it takes to play at the highest level, as well as the emotional support needed for the inevitable crashes along the way.

They’ve also benefited from some solid advice given to them by friends at their wedding shower prior to their nuptials in March 2017.

“They said, ‘You know, a lot of people think a marriage is 50-50, but sometimes it can be 90-10,” Julie said. “And for us, we’ve learned that whoever needs more time or needs more of the attention at the time, gets it. So whatever that is, wherever it is or whenever it is, we make sure our marriage comes first.

“We just make sure that we’re there for each other.”

The couple took off from the Philadelphia airport on Thursday bound for California for the Ertz Family Foundation golf tournament to raise money for their charity, which gives back to their communities by providing opportunities in sports and education. Zach has since returned to Philly in advance of training camp, and Julie is bound for Chicago, where she’ll be busy with the ongoing NWSL season and promoting her new book, titled “Chase Your Dreams.” The fact that both are doing just that helps make the lengthy time apart more bearable, they said, as does their faith and the understanding that all of this moving around will slow down before long.

“That’s like Zach’s go-to quote every time we are having a really, really hard time being away,” Julie said. “He says: ‘Short season of our lives.'”

March 24, 2020 SporterX
[ad_1] Quarterback Tua Tagovailoa, who is recovering from a hip injury, posted a video to social media on Monday that