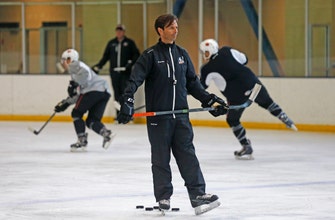 He is getting it with players he knows well, and with the organization that believes in them all.

Eakins was hired as the Ducks’ head coach on Monday, moving up from their AHL affiliate to take over a longtime NHL power that stumbled last season.

“This is just such an incredible opportunity,” Eakins said in his introductory news conference at the Ducks’ sparkling new training complex in Irvine. “The Anaheim Ducks have had such an incredible success rate here in Orange County. It starts with the division championships, the Stanley Cup, and also what’s going on off the ice. I’m fortunate to be a part of it.”

Eakins was the obvious choice to take over the Ducks, who are rebooting their franchise after missing the playoffs for the first time since 2012. General manager Bob Murray, who finished the season as Anaheim’s interim head coach, still waited 2½ months after the regular season ended to promote Eakins.

“This is just a natural progression for a guy who’s coached most of the guys on this team,” Murray said. “I said in the beginning I was going to take my time and make sure San Diego was finished playing (in the AHL postseason) before I started looking for a head coach. … There were a lot of good people I talked to. It was a good process for this organization to go through, but it just always came back to Dallas.”

The Ducks filled the NHL’s last head coaching vacancy with the first coach of the current version of the Gulls, who hired Eakins right after becoming the Ducks’ AHL affiliate in 2015. Eakins led a consistent winner while preparing the Ducks’ youngsters for the big leagues, and he took San Diego to the AHL’s Western Conference Finals this season.

Eakins wasn’t bothered by the delay in the Ducks’ move, or by Murray’s decision to talk to other candidates. After all, Eakins was busy trying to win a Calder Cup until May 27.

“I think my (interview) process was a little different,” Eakins said. “My interview has been going on for four years.”

The 52-year-old former NHL defenseman has worked extensively with the homegrown talent that currently fills much of the Ducks’ roster, and most of the remaining veterans know him slightly from training camps. Eakins expressed particular admiration for captain Ryan Getzlaf, who is heading into his 15th season with the club.

“We’ve heard a lot of good things about him from the young guys coming up,” Lindholm said. “I’m excited to have the new style of coaching. He’s (interested in) interacting with the players a little bit more, and the teams I’ve been on that have been successful had that. We have to do this together. We can’t be fighting against each other. … We’ve had the old-school coaches in here, and he brings in a new way.”

Eakins coached the Edmonton Oilers from the start of the 2013-14 season until December 2014, going 36-63-14. He was considered a blue-chip NHL coaching talent with forward-thinking opinions on strategy when Edmonton hired him, but Eakins couldn’t stop the Oilers’ decade-long struggles.

Eakins is just one part of a wholesale “transition” for the Ducks, according to Murray. The GM believes Eakins’ personable coaching style will be a positive break from the old-school approaches of Randy Carlyle and Bruce Boudreau.

Eakins’ belief in hardworking, speed-based hockey will be part of the Ducks’ move from a physical, dump-and-chase team to a faster, more exciting crew, Murray said.

“This team has to create an identity,” Murray said. “We don’t have one right now, and we’ve got to find one.”

The Ducks have been one of the NHL’s most consistent winners over the past 15 years, missing the playoffs just three times. Anaheim reached the conference finals in 2015 under Boudreau and again in 2017 with Carlyle, but couldn’t get back to its first Stanley Cup Final since its championship season in 2007.

The Ducks had won five consecutive Pacific Division titles under Boudreau and Carlyle from 2013-17, but they were swept out of the first round of the postseason in 2018.

Last season collapsed when they fell into a 2-15-4 slump shortly before Christmas. The Ducks rebounded after Carlyle was fired Feb. 10, but not quickly enough to make the postseason.

Murray, a longtime Chicago Blackhawks defenseman, also feels a certain kinship with Eakins: Murray’s first job as a GM was with the Blackhawks in 1997, but he was fired after just over two seasons.

“Much like my experience in Chicago as a general manager, sometimes your first chance doesn’t go so good,” Murray said. “You want to get back and try it again.”