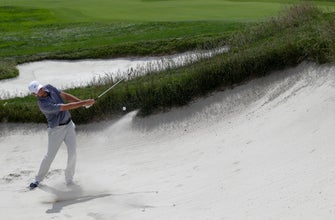 PEBBLE BEACH, Calif. (AP) — Tiger Woods and Phil Mickelson were among those who took issue with the greens at Pebble Beach for the 2010 U.S. Open.

Jack Nicklaus was among those who had no idea what they were talking about.

Woods finished his opening round in 2010 and described the greens as “just awful” for the way the ball wiggled to the left, wiggled to the right and rarely went in the hole. He described one putt as bouncing 3 feet in the air, which replays would confirm as a slight exaggeration. Mickelson said given the nature of poa grass late in the afternoon of that final round, the speed of the greens was too fast for anyone to make putts.

“What?” Nicklaus said, his eyes narrowing slightly as he heard the criticism from the most recent U.S. Open at Pebble Beach. “I won under those conditions. The golf course basically had gotten away from them.”

That was 1972, when Nicklaus hit that famous 1-iron off the pin on the 17th for a tap-in birdie. He still shot 74 that day. It turned out be his highest score by five shots in the final round of his four U.S. Open titles.

No one ever complains when they win.

Nicklaus was asked how many U.S. Opens he played where the course was over the edge.

“How many did I play?” Nicklaus asked.

Someone estimated he played in 45 U.S. Opens, to which Nicklaus replied with a wry grin, “Forty-five. That’s part of it.”

It was 44 appearances, but he made his point.

“I always thought the U.S. Open … you don’t want to be over the edge, but it should always be at the edge,” he said. “Sometimes it does (go over the edge).”

Several players have been on edge at the U.S. Open over the past few years.

Maybe over the edge.

Because while it’s critical for the USGA to get this one right, the onus for a good U.S. Open also falls to the players. Complaints are normal at the U.S. Open, and some of them are valid because mistakes are made. But it’s starting to sound like whining.

Not helping matters was a magazine article that allowed players to hide behind anonymity, open season for criticism without having to attach their names. One player even suggested that 10 to 15 players were willing to sit out after 2016 as the word “boycott” was bandied about.

Walking out on a major only sounds like a good idea when frustrations can be vented in private. No player has publicly said he would be willing to boycott, and until that day, it shouldn’t be taken seriously.

“What’s going through a guy’s mind?” Nicklaus said. “Let them boycott. Tell me how many guys do it. I have to say, the setups the last few years have not been real good, but that doesn’t mean … it’s the U.S. Open. They can play it down the back alley of an ice cream shop and you’ve got to go play.”

Maybe it’s money. Maybe it’s fame driven by social media. Players now feel their voices are louder and their platforms are larger, but the last thing golf needs is for players to dictate how the game should be played, especially when their main interest is their own.

If the USGA does its job — Pebble Beach is tough to get wrong — there will still be complaints.

Nicklaus used to say he would listen to players complaining at a U.S. Open and figure that’s one less player he has to beat. Brooks Koepka talks the same game, so maybe it’s no surprise he has won the last two.

“Nobody wants to hear anybody’s excuse,” Koepka said. “I find it annoying even when I play with guys and they’re dropping clubs or throwing them or complaining, like telling me how bad the golf course is or how bad this is. I don’t want to hear it. I don’t care. It doesn’t matter to me. It’s just something we’ve all got to deal with. If you play good enough, you shouldn’t have a problem.”

There’s no doubt the relationship between the USGA and the PGA Tour players has eroded in recent years. The mistake was going to two new courses in a three-year period. Going somewhere new increases the likelihood of surprises, such as dead grass on the greens at Chambers Bay and no wind for the wide fairways of Erin Hills.

Shinnecock Hills was set up for a great week until a few bad pin positions on the back nine Saturday that turned the U.S. Open upside-down.

Mickelson tried to make a point last year by swatting a ball on the green while it was still moving. Everyone had to play the same course. Mickelson shot 81 that day. Koepka, playing later in the afternoon when the greens were faster, shot 72.

Mickelson dished out more harsh words for the USGA two weeks ago when he mentioned all the U.S. Opens he played — this is No. 28 — and said, “One hundred percent of the time they have messed it up if it doesn’t rain.”

This is the same guy who in 2016 at Oakmont said, “This is a whole different style of golf, something that over the years I’ve become very effective at playing. Because of that, I would love to see it cross the line the way U.S. Opens often do, and become a little bit over the edge.”

The concern was the U.S. Open losing its identity of narrow fairways, thick rough, firm greens and the toughest test of the year. The hope is that it returns to what Curtis Strange said Arnold Palmer told him years ago.

“You should be exhausted Sunday night.”

Gabriela Ruffels fires nine birdies in the championship round of the 2019 U.S. Women’s Amateur