PHILADELPHIA — Signing quarterback Carson Wentz to a four-year extension was the right move for the Philadelphia Eagles, even if it comes with significant risk.

That risk, of course, is linked to Wentz’s health. He has suffered season-ending injuries in each of the past two seasons. He tore the ACL and LCL in his left knee during the 2017 season, and was shut down this past December after a stress fracture was detected in his back. He broke his wrist in college, broke his ribs during the preseason his rookie year, and had a separate stress fracture in his back during his adolescence that was discovered his freshman year at North Dakota State. 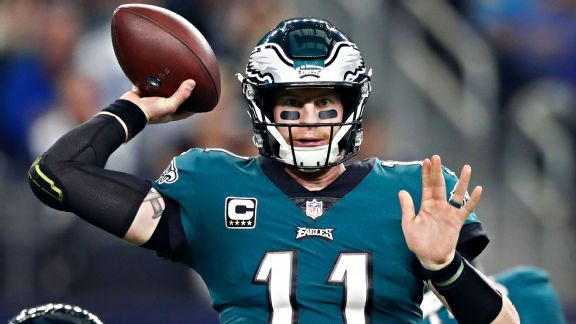 It’s hard not to think about that injury history when weighing the merits of signing Wentz, 26, to an extension through 2024 that’s worth $128 million and includes $107 million in guarantees, according to ESPN’s Adam Schefter. Wentz had two years remaining on his rookie deal, and the more cautious approach for the Eagles would be to see how the 2019 season played out before committing to Wentz for the long term.

But this is an organization that has been defined by its aggressiveness in recent years. That’s different from recklessness. The Eagles use all of the tools at their disposal to analyze a situation, and once they have determined a course of action, they pounce. That includes locking players up early if they view them as a core piece, and it doesn’t get any more core in their eyes than Wentz. They fell hard for him during the pre-draft process in 2016, moved up twice to select him No. 2 overall that April, and have been unwavering in their belief in him since — through injury, through attacks on his character and through magical runs orchestrated by then-backup, Nick Foles.

The Eagles know getting Wentz into a long-term contract now, they will save millions on the back end if he returns to MVP-caliber form. The NFL salary cap continues to push north and the price for premium quarterbacks will continue to skyrocket — especially when Kansas City Chiefs star Patrick Mahomes, who is eligible for a new deal after this season, gets his.

With the money for Wentz now allocated, the Eagles know precisely what type of budget they’re working with as they build their roster for the long term.

They also know Wentz isn’t the type of player who you play games with. If you’re committed, commit, and avoid any negative feelings that could stem from a long, drawn-out process.

Yes, there is a chance that this could all go wrong in a pretty big way. Wentz might prove to be injury-prone, and the Eagles could end up holding the bag — and a hefty one at that. The upside is they get him locked in at what will soon look like a discount, leaving them extra coin to spend on bolstering their supporting cast.

It’s a big bet, but the Eagles believe Wentz is the type of person and player to make bets on — they always have.

September 26, 2019 SporterX
[ad_1] The tricky thing about being a sports pundit, or at least playing one on TV, is the constantly raging
Top Headlines

August 7, 2019 SporterX
[ad_1] LAS VEGAS -- When Jaylen Brown got to town last weekend, he was looking forward to trying Mizumi, a
Top Headlines