After the Buffalo Bills finished with a 6-10 record last season, national expectations for the team in 2019 remain relatively low. Westgate Las Vegas Superbook set the Bills’ post-draft over/under at 6.5 wins and ESPN’s Football Power Index projects Buffalo to finish with 6.7 wins, 27th in the NFL. 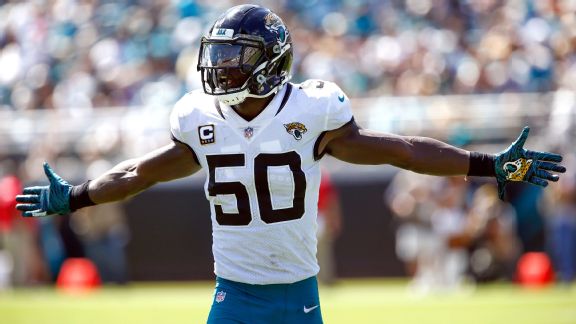 If the Bills stay flat this season, it will be with a roster that has been turned over considerably since a subpar 2018. The Bills have added 28 players — most are locks or in strong position to make the 53-man roster — and are encouraged that their personnel changes will lead to improvement.

However, coach Sean McDermott cautioned during the draft last month against simply assuming the new-look Bills will perform better.

“My biggest challenge — and probably one of the bigger challenges around the league — is how you bring a team together, quite frankly, when you’ve added [18] free agents and now draft picks to that,” he said. “There’s a chance that half of our team is new. That’s a little bit uncommon around the league, but that’s part of building it the right way, also.”

With the disclaimer that reporters cannot watch practice and begin to gauge position battles until an organized team activity on May 21, here is a look at the Bills’ position-by-position depth chart:

The retirement last week of Derek Anderson opens a path for Jackson to make the 53-man roster. After he was expected to be a mid-round pick but fell out of the draft entirely, Jackson still must prove in training camp that he is ready to stick on an NFL roster. If not, the Bills could release him and try to re-sign him to the practice squad. They entered the past two seasons with only two true quarterbacks on their 53-man roster.

General manager Brandon Beane said after drafting Singletary in the third round that McCoy remains the starter, but he later softened that stance during a May 8 appearance on 1270 The Fan radio in Buffalo. “[Gore will] push LeSean and LeSean will have to be on his best or — he’ll compete,” Beane said. “Right now, LeSean is our starter and that’s how we see it. But Frank is an accomplished back, he’s gonna be a Hall of Famer and he’s ready for whatever role we want him.” Indeed, there is a wide range of scenarios in which this position could shake out by September, and Singletary seems to be the only roster lock. Perry’s potential impact on special teams should not be discounted when considering a third or potential fourth roster spot at the position. Wade is a former English rugby player who will not count against the 90-man roster as part of the NFL’s international pathway program.

He played only 16 percent of snaps this season but should stick around for a third season as long as offensive coordinator Brian Daboll desires a fullback.

There was an influx of veterans at this position but no draft picks and no clear-cut No. 1. The free-agent additions could push McCloud, a 2018 sixth-round pick, off the team. Williams, who excelled last season in the Canadian Football League after failing to crack the Rams’ roster in 2016, is intriguing but faces the same longer odds as other former CFL players trying to break into the NFL.

This position was almost entirely remodeled this offseason and the pecking order is up in the air. Kroft (guaranteed $8.3 million after signing this offseason) and Knox (a third-round rookie) both seem to be locks. Fisher, a converted offensive tackle formerly of the Bengals, and Sweeney, a seventh-round pick, could compete for a blocking role. The clock is ticking for Croom, once undrafted in 2017, to emerge in his third NFL training camp.

Cody Ford is an offensive lineman out of Oklahoma who was a first-team All-Big 12 selection for the Sooners.

Beane said Ford, whom he coveted in last month’s draft and traded up to acquire in the second round, will likely begin his career this summer with the second-team offense at right tackle. That means Dawkins (left tackle) and Nsekhe (right tackle) are penciled in as the starters, but that hardly seems set in stone given Dawkins’ struggles last season and Nsekhe’s versatility to play on the left side. Waddle, Sirles and Conor McDermott figure to compete for the final spot.

Teller, a fifth-round pick last season, is the incumbent starter at left guard but will face competition from a trio of free-agent signings, any of whom could also start at right guard: Feliciano ($2.25 million guaranteed), Long ($1.2 million guaranteed) and Spain ($200,000 guaranteed). This position seems as up in the air as any, but it would be surprising to see Ducasse factor into the mix. It is mildly shocking to still see him on the roster after the Bills relegated the veteran to a game-day-inactive role late last season.

Morse, formerly of the Chiefs, is now the Bills’ highest-paid player in terms of average salary per season. He unseats Bodine, the one-time starter at center who now must compete with the versatile Feliciano and Long for the backup center role.

This position is near the top of the Bills’ needs for the 2020 offseason, when the contracts of Hughes and Lawson expire and Buffalo could release Murphy without much financial penalty. The Bills need the trio to create a stronger pass rush than it did last season. Harold and Johnson, additions this offseason, could push Yarbrough and Love off the roster.

Oliver will start immediately in Kyle Williams’ old 3-technique role and will quickly have a chance to answer questions about whether he is undersized for that spot at the NFL level. The Phillipses will be rotational pieces.

Alexander, 35, will be a vital locker-room presence in what he has said will be his final NFL season. Lacey and Maurice Alexander might compete for a single special-teams spot, while Joseph, a fifth-round pick, should feel relatively secure to make the final roster.

Edmunds, a first-round pick last season, will again be a critical piece of the Bills’ defense and still must settle into a middle-linebacker role in the NFL, which marks a change from his college responsibilities.

The Bills brought back Gaines, who held down their No. 2 cornerback spot in 2017, with a $2.1 million deal in free agency. That does not guarantee he will win his old job back; he will still have to hold off 2018 undrafted free agent Levi Wallace and former first-round pick Kevin Johnson, signed from the Houston Texans this offseason.

After being claimed off waivers from the Patriots, Bojorquez served as the Bills’ punter for the first eight games of last season but landed on injured reserve. Carter missed all of last season with a torn ACL. They will compete this summer.

This will be a critical season for Hauschka, who turns 34 in June and enters the final season of his contract. His performance dipped late last season after a hip injury and he might need to rebound in 2019 to earn a new deal.

He will enter his third season as the Bills’ long-snapper.

January 12, 2020 SporterX
[ad_1] BALTIMORE -- John Harbaugh was standing in the back of his Baltimore Ravens locker room, trying to assess the
Football

February 3, 2020 SporterX
[ad_1] 11:00 PM ETESPN staffJ.Lo and Shakira just did that.If you're still trying to pull yourself together after the epic