ARLINGTON, Texas — The Chicago Cubs are about to kick off what might be the most unpredictable season since they became annual contenders earlier in the decade. From algorithm predictions to media “experts” to Las Vegas oddsmakers, there is simply no consensus for 2019 on the team that won the most regular-season games from 2015 to ’18. Are the Cubs closer to a 100-win team or an 80-win team?

We’ll start to find out on Thursday, when they take on the Texas Rangers, but in the meantime, here is a guide — looking at the possible ups and downs — to this year’s Cubs.

What could go right: The team gets back to a slugging/walking mentality while improving its situational hitting, such as bringing home a man on third with fewer than two outs. The middle of the order could be devastating now that Javier Baez has established himself at the plate and Kris Bryant is healthy. Think of Bryant, Anthony Rizzo, Baez and Kyle Schwarber batting 2-5 with Willson Contreras returning to form in the mix as well. It’s the devastating lefty/righty combination the Cubs’ front office dreamed of when putting the team together — not to mention a group that already has won a World Series.

A new MLB season is upon us, and what better way to celebrate than with a schedule packed with Opening Day matchups?

Thursday on ESPN and ESPN+:

What could go wrong: Simply put, the Cubs’ offense picks up where it left off at the end of last season. No one really understands why their hitters stopped taking walks and subsequently lost their power, but it happened. After years of pushing and prodding for better approaches in certain small-ball situations, if the Cubs don’t come through this season, it might never happen. That has been a point of emphasis during the spring, with Joe Maddon taking over the instruction. At this point, all anyone can do is cross their fingers and hope the second half of last season is not the new norm at the plate.

When to get excited: It’s not sexy, but if the Cubs are at the top of the league in walks come June 1 or so, good things will follow. There’s a handing-off-the-baton mentality with this group of hitters — at least when they are at their best. Simply getting on base to their capabilities will create havoc for the opposition.

When to worry: There are two indicators that signal trouble for the Cubs’ offense: the aforementioned inability to get on base via walks and a high strikeout total. The Cubs have been good at slowly eliminating the strikeout from their game, but they still do a lot of swinging-and-missing in stretches. If those stretches last longer than a day or two, scoring troubles will be a season-long narrative.

Scout’s take: “With a so-so outfield in the slugging department, Willson Contreras becomes a key for me. He has a good swing, but like a lot of those hitters last year, it abandoned him. It looks like he’s had a good spring, so maybe last year was just a learning experience. The Cubs need him.”

What could go right: Baez becomes a Gold Glove shortstop, making the Cubs really deep up the middle when Addison Russell returns from his 40-game suspension. Reports on Bryant indicate that he’s at the top of his game at third base, and Rizzo has always been solid at first. With the demotion of Ian Happ to Triple-A Iowa, pitchers will get near full-time center-field duty from Albert Almora Jr., one of the best in the game. Both Contreras behind the plate and Jason Heyward in right are solid as well. And Schwarber at least has a rocket for an arm.

What could go wrong: In the past, Baez has had a tendency to make the spectacular play while sometimes booting the routine ones. That label wasn’t a big deal at second base, where his arm saved him, but he’ll need to keep up what he began after taking over at shortstop last year. A high error total at short could cost the Cubs. None of this addresses second base, where soon-to-be 38-year-old Ben Zobrist will play a lot. Regression from either Rizzo or Heyward is possible as they enter their age-30 seasons.

What could go right: Father Time is not even a whisper of a storyline this season, and the talented names in the rotation reach their potentials. Jose Quintana could be the best No. 5 starter in the game, as he is coming off a solid spring and has mid-rotation stuff. Meanwhile, it would be tough to find three guys who know how to pitch better than Jon Lester, Cole Hamels and Kyle Hendricks. The wild card is Yu Darvish.

What could go wrong: PECOTA, which projects little better than a .500 record for Chicago, is proved right, and the regression in the rotation begins in earnest. Hamels and Lester pitch more on guile than pure stuff, but it’s not enough, and Darvish continues his midgame meltdowns — if he can even remain healthy enough to take the ball. The rotation — outside of perhaps Hendricks — is the one area that could go south quickly. As is, several guys were just OK this spring. 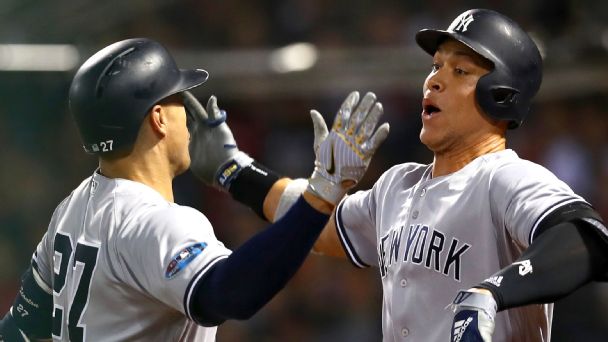 Which powerhouse will rule the AL? Can anyone top the Dodgers in a crowded NL race? We’ve got the new season covered with predictions, rankings and more. Preview

When to get excited: Lester’s first start on Thursday will be a good litmus test, as he never locked in during the spring. If he gets the feel right away, you can feel better about his prospects for the season. He’s bound to find it at some point, but the sooner the better. In any case, health will be the No. 1 concern with the staff. If they’re rolling through the All-Star break with minimal starts missed, it’s likely that the rotation is winning a lot of games.

When to worry: If Tyler Chatwood — the current long man — is making multiple starts, that probably doesn’t bode well for the Cubs. That’s not just because Chatwood is coming off a horrendous year. It will mean the top five guys are missing starts or exceptionally mediocre on the mound. Home run totals will be a good stat to follow, especially with Lester and Hamels.

A telling number: The Cubs again will have one of the older pitching staffs in baseball after having the second-oldest staff in the majors last season, with an average age of 30.2 (Rangers, 30.4).

What could go right: If Pedro Strop has a solid month filling in as closer, followed by the healthy return of Brandon Morrow, then all could be OK in the back end of the bullpen. That doesn’t include a revamped and more mature Carl Edwards Jr., who had a very good spring using a new delivery. On paper, the Cubs are deeper than they’ve ever been on the mound, as their Triple-A bullpen should be solid. Morrow’s return is as important as anything.

ESPN’s Buster Olney leads the discussion of the latest news and notes around baseball with the game’s top analysts. Listen

What could go wrong: Strop has closed only in stretches for the Cubs, and overuse could expose him. That means more pressure on Edwards and others. If last year’s workload catches up to Steve Cishek, the Cubs will have a big hole in the middle innings. The organization has never been consistent or deep from the left side, so the Cubs will be relying on relative unknowns. Even Mike Montgomery is in an unfamiliar role as short man, outside of the 10th inning of Game 7 of the 2016 World Series.

When to get excited: The day Morrow returns (May 1?). Once he’s back, roles should be more defined.

When to worry: If the oft-injured Morrow takes longer than a month to return or, worse, has a setback or a new injury. In that scenario, the Cubs would have to dive into the marketplace much earlier than expected.

Scout’s take: “I have my doubts about both Cishek and Edwards. Can’t just go off the spring, but Cishek didn’t look sharp in any games I saw. And for a guy who has control problems, it will be interesting to watch Edwards with his new Kenley Jansen hesitation move. If it doesn’t work, then what?”

What could go right: A more hands-on Joe Maddon has the desired effect, as players told the front office they want to maximize the decades of experience the Cubs manager brings to the diamond. If the team improves dramatically in situational hitting, it could be tied directly to Maddon’s work in the spring. Overall, Maddon just has to be the best version of himself — the guy who has been to the playoffs eight of the past 11 years with two organizations.

Meanwhile, if the front office has to add only the usual arm or two at the trade deadline, then its inaction this past offseason will have paid off. Sometimes the changes you don’t make are the best ones, and a group that has been together for several years might have an advantage over other teams searching for chemistry.

What could go wrong: Nothing Maddon or the front office tries to do changes the fact that the Cubs’ young hitters simply aren’t as good as first thought. The Cubs are making peripheral-type changes to their daily routine, but that won’t necessarily produce an offense that can score at a championship level. If this is the one season the Cubs’ bullpen falters after years of success, Maddon is likely to be the fall guy –for both the pen and the lack of advancement of young players. He’s on the last year of his contract, so a midseason managerial change isn’t out of the realm of possibility.