PHOENIX — New England Patriots coach Bill Belichick met with reporters on Tuesday at the NFL’s annual coaches breakfast, and Jeff Howe of The Athletic tweeted a unique breakdown of how it unfolded.

Belichick, per the norm in this setting, was not especially talkative. There is no decisive word on whether the unofficial total of 21 “we’ll see” responses is a career high (this reporter only counted 20), but here is the breakdown with a little creativity added:

Question: How will the acquisition of defensive end Michael Bennett help the team?

What BB said: “We’ll see when we get everyone out there and practice. We’ll see how it goes.”

What he means: I wasn’t investing a $6 million base salary in him this year without having an idea of how he’ll help — as a tough, physical end-of-the-line defender in certain packages who can reduce inside as a sub-rusher. But I’ll keep that to myself because there’s no need to advertise that to our opponents right now.

Question: Has the onside kick become a non-competitive play, and does that contribute to your thoughts on the proposal that would allow a fourth-and-15 play instead?

What BB said: “There’s a lot of things to consider. So let’s listen to all the different points of view, and we’ll see what everyone has to say.”

What he means: I’m happy to share my unfiltered thoughts with my fellow coaches. Reporters? No thanks.

Question: A follow-up on Michael Bennett, whom you were complimentary of prior to Super Bowl XLIX. Is he still the same player?

What BB said: “We’ll see. He hasn’t been in our system before. We’ll see how it goes.”

What he means: Good try. You already asked me that.

Question: What made tight end Matt LaCosse a worthwhile pursuit as a free agent?

What BB said: “We wanted to have him on our team. We’ll see how it goes.”

What he means: He played well against us in the 2017 preseason finale when he was with the Giants (5 catches, 60 yards, 2 TDs). I’ve had my eye on him since he was a young, developing player.

What BB said: “We haven’t done anything since the beginning of February. We’ll see when we get out there.”

What he means: Things seem to be promising, but I don’t talk about injuries publicly.

Question: Do you have any input on the onside kick proposal?

What BB said: “We’ll see how it goes today. I’m sure there will be a lot of discussion on that.”

What he means: Come on, man! I already (non) answered that. Try to pay better attention, please.

Question: Why is it your preference to have every play allowed to be reviewed?

What BB said: “We don’t have any proposals on the table this year. There are several out there. We’ll see how it all goes. It’s a good discussion.”

What he means: I’m not getting into any rules topics with the media, but you haven’t seemed to have figured that out yet.

Question: What did you think outside linebacker John Simon brought to the team last year that led you to re-sign him?

What he means: He was a valuable contributor for us in a variety of roles, and a priority to re-sign. But I’m not going through a detailed personnel report here at the breakfast.

Question: Brandon Bolden and Terrence Brooks are good special-teams players signed by the team as free agents. Was improving the coverage units a top priority?

What BB said: “I think both of those players will help our team. So we’ll see what their roles are.”

What he means: Absolutely.

Question: Would you say 2018 seventh-round pick Ryan Izzo’s strong suit at tight end is his blocking?

What BB said: “I think he can do several things. But we’ll see. Give him an opportunity this year and we’ll evaluate him.”

What he means: He flashed enough promise as a rookie to make the initial 53-man roster before we moved him to IR. So we obviously think there’s something to work with there.

Question: Have you seen Michael Bennett play some of the techniques he projects to play in New England? Those seem like considerably different schemes he’s played in.

What BB said: “There are some differences. Maybe there are some similarities. We’ll see what happens when we get on the field and start practicing.”

What he means: Another Bennett question? I already answered two of them before. We’ll see if you’re smart enough to figure out I’m not going to answer them. 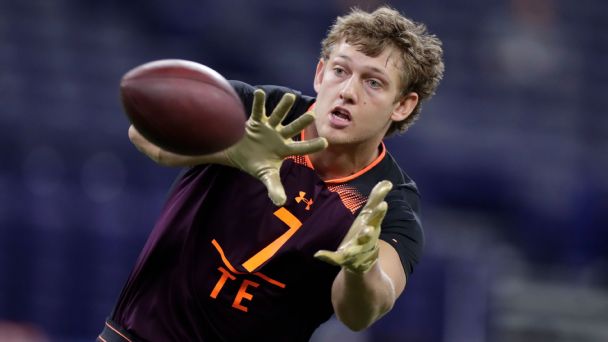 Question: With all the young players who were on IR last year, what do you look for to gauge their progress?

What BB said: “Those guys have been working every day. They’ve continued to get better. They’ll continue to work and we’ll see where they are.”

What he means: A few of our six draft picks from last year who landed on IR will hopefully find a way to carve out roles. If not, that means we didn’t have a good draft.

Question: What did you see from 2018 sixth-round pick Braxton Berrios last offseason before he went on IR?

What BB said: “Didn’t see a lot. He didn’t have a lot of opportunity to participate. So we’ll see what happens this year. New year. Braxton has worked hard. I’m sure he’ll give his best effort.”

What he means: He needs to stay healthy so we can evaluate him. That uncertainty contributed to our heavy pursuit of free-agent slot receiver Adam Humphries this year.

Question: Do you feel instant replay is possibly heading in the right direction by expanding it to review for pass-interference penalties?

What BB said: “There is a lot of discussion about that. A lot of great discussion. I’m sure there will be some more. We’ll see. We’ll see what those thoughts are.”

What he means: Already answered this one earlier. So I’m going to say ‘we’ll see‘ twice for effect.

Question: Sean Payton said the competition (committee) has agreed to put out a proposal to allow a challenge for a play that wasn’t called as pass interference, which would address the play in the NFC Championship Game. Are you in favor of that?

What BB said: “We had a lot of discussion about that yesterday. We’ll see what — I know Sean and Mike [Tomlin] met with the competition committee last night, and we’ll see what the results are that come back. Just have to see how it goes.”

What he means: Repeat question again. So a repeat ‘we’ll see‘ is what you get again.

Question: With free-agent signing wide receiver Bruce Ellington, does his experience in systems similar to yours give you an idea of how he might fit with you?

What BB said: “He’s got plenty of plays on tape. We put the players in our system and we’ll see how they do.”

What he means: We’re light on the wide receiver depth chart — which you seem to write about every day — and he was available. So let’s not over-analyze it.