It happens. Quarterbacks have bad games. It has just been a rare occurrence this season for the Rams’ third-year quarterback who has led the team to an 11-2 season and a second consecutive division title.

So following a bye week, Goff earned a pass after a lackluster performance in a win over the Detroit Lions in which he was 17-of-33 for 207 yards with a touchdown and interception.

But after he threw a career-high four interceptions, and passed for a season-low 180 yards while completing only 45.5 percent of his throws in an uninspiring 15-6 loss to the Bears, it begs the question: What’s going on with Goff and can he turn it around Sunday against the Philadelphia Eagles with the NFC’s top playoff seed and home-field advantage still in reach?

“Nothing wrong with me,” Goff said, when asked if he was physically OK. “I just have to play better.”

Goff, never one to panic or express much concern, kept his calm and collected demeanor when repeatedly asked Sunday and again earlier this week for the cause of the consecutive down games. He acknowledged that he had not played well and said, “There’s a lot of things to work on,” but never offered much insight. When pressed for specifics, Goff said “I need to take care of the ball better.”

Through 11 games, Goff had six interceptions, and elevated himself into the MVP discussion with a perfect passer rating against the Minnesota Vikings and a thrilling, four-touchdown win over the Kansas City Chiefs.

In the past two games, however, Goff has been intercepted five times, with several other close calls. Against the Lions, he was strip sacked, and a week later the Bears knocked him into the end zone for a safety.

“He’s going to work himself out of it,” said receiver Robert Woods, who has 1,032 receiving yards this season. “Tell him to just keep firing, keep being confident, keep staying poised in the pocket and just keep your eyes downfield.”

Rams coach Sean McVay shouldered much of the blame for Sunday’s loss and said he should have put his players, including Goff, in better positions to succeed. But McVay also credited the Bears’ defense, which has a league-best 34 takeaways and ranks fourth in the league with 40 sacks.

“He’ll be the first to tell you he’s got to take good care of the ball and we can’t make some decisions,” McVay said of Goff. “But I think I also have to stop putting our players in some spots that aren’t really conducive for finding a way of having success on those given plays and if everybody executes their role to the best of their ability.”

Running back Todd Gurley II bailed Goff out in Detroit, as he rushed for two touchdowns in the fourth quarter to lift the Rams to a 30-16 victory. But McVay lent Goff no such help from the MVP candidate on Sunday. Gurley carried the ball only 11 times, and gained just 28 yards — his fewest rushing yards since 2015.

The 29-degree weather in Chicago offered little help to Goff, either, though the Northern California native would never admit it.

According to ESPN Stats & Information, Goff has played in just five NFL games when the temperature at kickoff was under 40 degrees. The Rams went 2-3 in those games. This season, Goff has failed to pass for a touchdown in only two games: One was in Denver, where it was 25 degrees at kickoff, and the other was in Chicago. 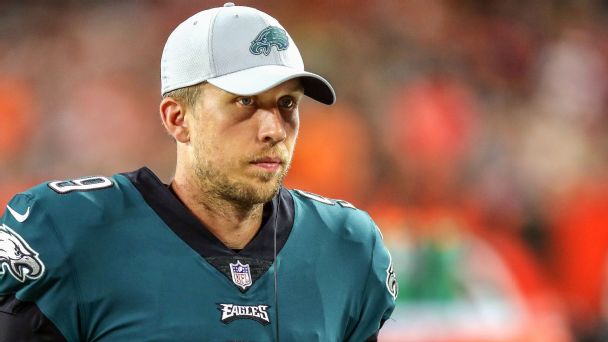 And then there’s the absence of Cooper Kupp, the trusted third receiver who started 10 games and was on pace to have a 1,000-yard season along with Woods and Brandin Cooks before he suffered a torn ACL against the Seattle Seahawks on Nov. 11.

Receiver Josh Reynolds and tight end Gerald Everett had outstanding performances in the immediate aftermath of Kupp’s injury in Week 11, but in the past two games, the offense has appeared to be a shell of its former self — a certain side effect of Kupp’s absence.

Goff, for his part, has continued to look ahead, knowing the Rams’ ultimate goal is still very much in play, even if the road there just became a bit tougher.

A win over the Bears would have secured a first-round playoff bye. Now the Rams must defeat the Eagles, plus rely on the Bears to lose to the Packers. As for the battle for home-field advantage, that too isn’t entirely in the Rams’ hands any longer. At 11-2 and tied with the New Orleans Saints for first place in the NFC, the Rams lose the head-to-head tiebreaker by virtue of their Week 9 defeat to the Saints. So the Rams must continue to win, and hope for the Saints to lose.

“A lot of things could be a lot worse than 11-2 going with three more weeks in the season,” Goff said.

He’s right, of course. But for a team that’s 11-2, with expectations of a Super Bowl, the Rams can’t afford many more miscues from their quarterback as they fight for playoff position in what could prove to be three of the most important games of the regular season.