In the days leading up to Week 13, the NFL sent a video to its on-field officials. It revealed a series of missed offensive holding penalties and delivered a clear and unusual directive. Moving forward, the foul was to be strictly enforced.

You won’t believe what happened next.

Officials didn’t simply step up enforcement. They threw 42 percent more offensive holding flags (94) than they had in any week since at least 2012. In searching through the ESPN Stats & Information database, I couldn’t find a week with more than 66 such calls over that time period.

In Week 14, the rate dropped back to normal range (62). It is not clear if the NFL ordered a reversal of its previous edict, but the numbers do reflect a softer approach. Regardless, the episode represented at least the third instance this season of a massive penalty spike appearing and disappearing with apparent intention, an unusually stark window into how the league manages penalty intensity throughout a season.

The NFL has experienced its usual count of officiating controversies in 2018, most recently a missed call Monday night on an illegally blocked field goal by Seattle Seahawks linebacker Bobby Wagner. But as aggravating as those mistakes are to fans and teams, they are inevitable as long as humans are doing the officiating.

On the other hand, the spikes we have seen this season are unusual and not necessarily the result of judgment errors or poor technique by players. They are intentional, purposeful changes in enforcement. The league has acknowledged some and been silent on others.

It began in the preseason with a two-stage slowdown in calling the new use of helmet rule. The league issued a clarification after officials threw 51 such flags in the first 33 preseason games. There were only 20 calls over the final 32 preseason games, and then just eight in the first 12 weeks of the regular season.

In Week 4, the league announced a clarification to stem a wave of roughing the passer flags. After calling an average of 11.3 per week in the first three weeks, officials slowed its pace by about 45 percent to an average of six per week.

The holding extravaganza was less public, though. Former NFL vice president of officiating Mike Pereira said on Fox Sports during Week 14’s Thursday Night Football game between the Tennessee Titans and Jacksonville Jaguars that the league had issued a “point of emphasis” and was “trying to get more holding calls.” The league would not confirm this when I inquired.

Nor has the league acknowledged publicly a recent increase in enforcement of the helmet rule. There have been six such calls in the past two weeks, including the first against an offensive player, bringing the season total to 14. The uptick times with public outcry over a missed violation against Dallas Cowboys linebacker Jaylon Smith in Week 13, on a hit against New Orleans Saints tailback Alvin Kamara. (Smith received a $26,739 fine for the hit.) 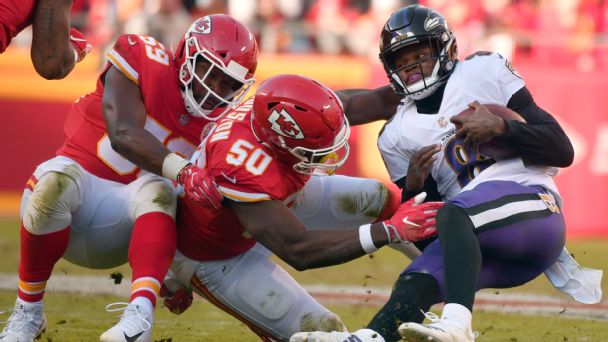 Catch up on what’s happening coming out of Week 14:
• Barnwell: Biggest weakness for each playoff contender »
• Predictions on Russell Wilson’s next contract

The motivation behind the holding spike is less clear. Why would the league want to make it harder for linemen to protect quarterbacks in a year of unprecedented passing numbers and improved television ratings?

Entering Week 13, the league was about 10 percent below last season’s pace on offensive holding calls. But after 14 weeks, the numbers are almost identical. There have been 691 holding calls this season, compared with 690 calls at this point in 2017.

Is it possible that NFL players are holding at the exact same rate as they did in 2017? Perhaps. But what’s clear is that the foul is now being officiated at precisely the same rate.

Considering that offensive holding is the most common NFL penalty at this moment, it’s worth pointing out a larger trend. In 2014, NFL officials threw a total of 4,093 flags for all types of penalties.

What to make of this apparent approach? The good news is that the Week 13 spike doesn’t appear to have impacted the outcome of any games in an obvious way. The calls were evenly split among winners (47) and losers (47) of games that week.

But “strict enforcement” means different things to different officials. Referee Shawn Hochuli’s crew, which has the highest penalty rate in the NFL this season, threw 10 holding penalties on the offense in Week 13 (and another 10 in Week 14 for good measure). Games like that aren’t fun to watch and feed the perception of officiating “taking over” a game.

Meanwhile, referee Bill Vinovich’s crew — which annually ranks near the bottom of flag frequency — threw five in Week 13. For the season, Hochuli’s crew has thrown nearly four times the number of flags for offensive holding (69) as has Vinovich’s (18).

Ultimately, we want consistency from officials in all sports. It can be difficult to achieve among each of the NFL’s 121 officials. In the aggregate, however, it is possible.

I wouldn’t expect the NFL to say publicly it will enforce rules more strictly in some weeks than others. And not all of this season’s spikes can be attributed to the goal of consistency. But in the big picture, the numbers speak for themselves.